Some of you probably saw The Yard Milkshake Bar’s ridiculously stacked unicorn shakes on TV. Well, now they’ll be in Virginia Beach.

The chain is known for serving day-glo shakes that look like they grew in Willy Wonka’s secret garden: whipped-cream mountains adorned with doughnuts, popsicles or entire frosted cupcakes.

The Yard Milkshake Bar is one of the bigger players in the “crazy shakes” trend that inspired a minor media frenzy a few years back — founded in 2017 by Logan and Chelsea Green in Gulf Shores, Alabama, and known for hosting long lines out the door for its stacked $15 shakes. The Yard has 9 previous locations, often in beach and vacation towns around the South.

By the time the Yard appeared on the venture-capital investment TV show in November — on which billionaire Mark Cuban offered the couple $400,000 to expand their then-four-location milkshake chain — the Yard was already in full expansion mode. In the end, the Greens didn’t end up signing Cuban’s contract after seeing the fine print.

“By the time the episode aired,” Chelsea Green told The Pilot, “we had already signed multiple franchises.”

Still, the TV show is what caught the attention of Virginia Beach franchisees Anthony and Kelly DiPasquale, then both working in real estate.

“My wife and I were sitting around watching Shark Tank,” he said, “And we thought, ‘Hey, that’s a great idea!’ This hit us like nothing ever before. We paused it and rewound it during the show. We said I want one of those right now.”

They figured other people might feel the same way, and so last December, before the pandemic was even a mote in anyone’s eye, the couple signed on as a franchise alongside Anthony’s brother, Mario, who plans to open another location in Dallas.

“Maybe we’re the only crazy ones to open up a business during these crazy times,” Anthony DiPasquale said. “But when things got crazy, it just drove us harder.”

They had hoped to open earlier in the summer, but faced construction and permitting delays after the pandemic began. Their grand opening is now scheduled for Sept. 18, and the Virginia Beach franchise will offer a couple signature local flavors alongside the Yard’s complement of sundaes and Mason-jar milkshakes made with Hershey’s ice cream, and housemade cookie dough pints.

“The ‘Orange Crusher’ is definitely one we’re going to push,” DiPasquale said. “The Orange Crush is such a big hit here we decided that it’ll be our flagship, our signature Virginia Beach shake.” 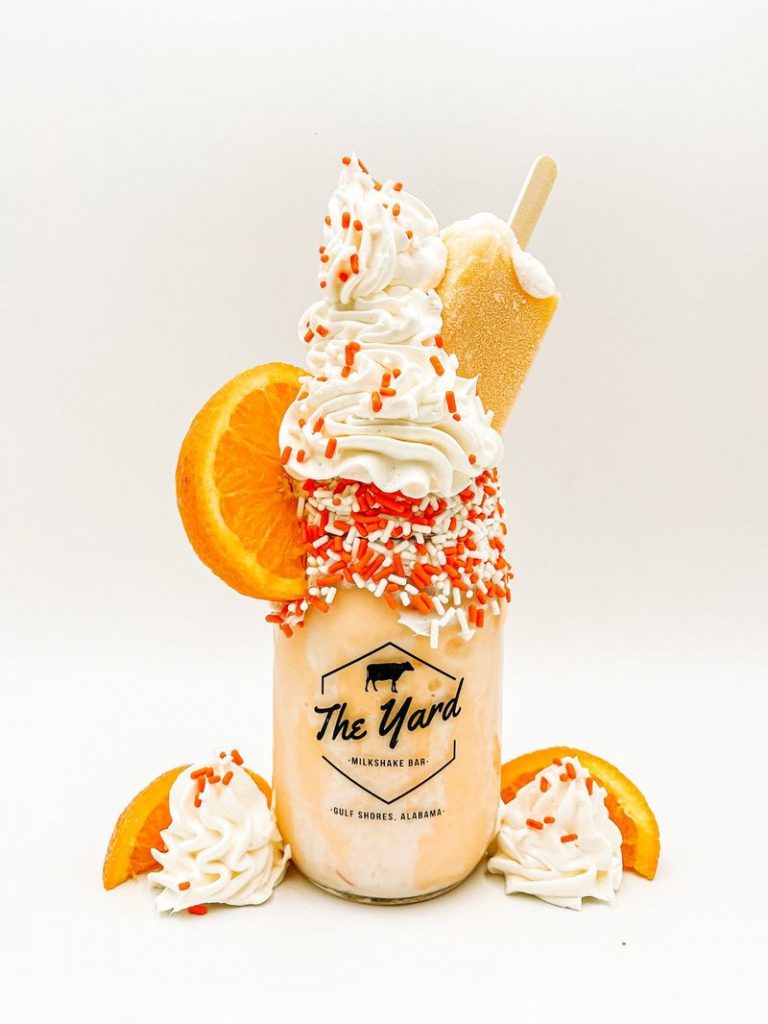 The shake does not contain vodka — you’ll have to add your own at home — but it does contain orange blossom ice cream with marshmallow cream around its rim, towering whipped cream, sprinkles, an entire orange-vanilla popsicle and a sizeable orange wedge.

The other locals-only flavor, the Seaside Sensation, is designed to mimic the sea and sand and sky of the beach, with crushed graham-cracker “sand” and blue cotton-candy “surf.”

Each shake, from a “unicorn” with rainbow sour ribbons to a sparkly “Mermaid” with birthday cake ice cream, comes with a souvenir Mason jar inscribed for Virginia Beach. But the DiPasquales hope that more than tourists will come to try the shakes, and chose a location a bit removed from the Oceanfront so more locals would be likely to stop by.

The shakes are fresh-made and take a bit of time to make, hence the chain’s reputation for long lines — and so especially during the pandemic the Yard has expanded their grab-and-go sundae options for those who’d rather not spend time in a socially distanced line. Seating, DiPasquale said, is mostly outside.

But to get the premium shakes, you’ll likely have to time your visits carefully or wait a bit.

The Yard Milkshake Bar plans its grand opening Sept. 18 at 3229 Virginia Beach Blvd., Suite 103. Menu and other details at theyardmilkshakebar.com/virginia-beach.